Increase in fertility? Get fathers to work... at home!

Europe has allarming fertility problems that might lead to welfare and public finance collapse, solution is simple: get men to do the housework!

Why are there so few children born nowadays in Europe? For more than two decades European governments are asking this question to teams of experts, who prepare analyses and propose solutions for stimulating demographic growth. There are debates over the effectiveness of policy measures for influencing procreation decisions. Demographers centre on the decision that women make about whether to have children in the first place, and then – how many. And one child is not enough; more is needed if the ultimate goal is reaching generation replacement (fertility rate at the level of 2.10-2.15). And that is important for the long-term sustainability of welfare state and in a larger picture – public finances.

I am leaving out the question of alternative scenarios, like encouraging migration, or a growing group of childfree persons that would never decide to have children even if the government offers most generous family support. Moreover, the long-term economic forecasts with regard to the evolution of pubic finances change over time – it is impossible to take into account all the factors, just as it was not possible to predict demographic downfall that the Western societies are now experiencing.

Recognised by the European Union, the issue of work-life balance has been the main drive behind such policy documents, like for example, Barcelona targets for childcare services and early education. Scandinavian countries along with France provide high levels of accessibility of these services and note higher than the EU average fertility rates. And childcare services remain to be the first pillar of successful family/childcare policies, but the second element the special incentives for the fathers to share the leave, as the basic instrument to support more gender equality in care.

The Nordic countries have probably the most stable and sustainable situation with regard to fertility among the European countries: some of them, experiencing the fall in fertility in late 1980s/early 1990s, reformed their family policies to provide, among others, more support for paternal involvement. Gender equality became the policy goal in Northern Europe and apart from providing affordable childcare services, the countries expanded fathers-only entitlements to parental leave throughout the 1990s and 2000s. Currently Norway and Iceland have three months of parental leave, Sweden – two (but adding the third month is presently under discussion), while Finland offers nine weeks for the fathers altogether. Denmark is the only country, where there is only 2 weeks of paternity leave.

Iceland is on the top of the rank of countries with regard to providing best conditions for gender equality (Global Gender Gap Index). One of the indicators that counts is the fact that the country introduced three months of the parental leave with individual entitlement for the fathers beginning from 2001: the percentage of fathers, who decide to use their entitlements, was high already at the beginning – about 90% of the fathers take their part of parental leave.[1]And even though the number went down a little bit during the difficult years of the economic crisis, the overall effect of the Icelandic reforms is a remarkable increase in fathers’ involvement in childcare, that has now become the part of parenting culture in the country. While the social pressure used to be to fulfil the role of fathersas breadwinners, and taking the leave was not in line with this typically male role, nowadays the perception of fatherhood has radically changed. Thus, fathers might be judged if they do notstep out from their professional life for at least a couple of months to actively take care of their child.[2]

What is the link between demography and gender equality? Though research on the links between father’s quota and procreation decisions is quite disperse, basing on the existing studies, we could try to prove that “daddy leave” might represent one of the crucial policy instruments when it comes to boosting fertility.

Let’s start with preferences with regard to childbearing. Methodologically speaking it is very difficult to make the respondents answer what they really want: they might not be entirely sure, but confirm what they are expected to answer. But leaving these reservations aside, and no matter which question they are asked, a great majority of women and men declare they would like to have about two children in their life. Importantly, we can observe an interesting gender gap: the mean personal ideal number of children is a little higher for men than for women in countries like Poland (m:2.41, w:2.05), Portugal (m:2.0, w: 1.71), Cyprus (m:2.87, w:2.65), Germany (m:2.17, w:1.96).[3] Unsurprisingly, these countries are not on the top of gender equality indexes, but are often classified as “familialistic” or “male-breadwinner” gender regimes. A figure for Poland is especially puzzling, presenting childbearing preferences for women and men in two situations: 1) among young people (age 18-24) and with no children and 2) among persons already having at least one child, and at the age between 30 and 34 (so when the second child usually appears). While young women are much more willing to have children in the future than their male colleagues, the situation changes afterwards, when there is already a child within the family. Thus, while 35% of male respondents with children would still like to procreate, women’s enthusiasm seems somehow dampened after the first experience with childbearing.

Figure 1: childbearing preserences in Poland, according to age, sex and whether having children already 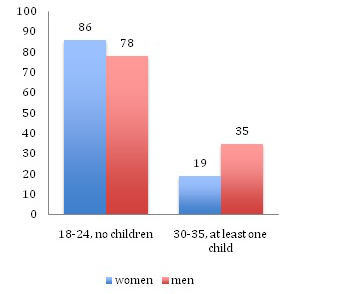 Why is that? Why does the experience of having a child seem to discourage women from further procreation, while men stay open and ready for more kinds to come? One more figure showing men’s engagement in domestic duties might shed a new light on the coincidence of women being less eager than men to have children in countries with higher degree of gender imbalancein domestic work (when men do less) (figure 2).

Figure 2: Gender gap with regard to time devoted to domestic activities

There is some evidence showing the causal link between men’s engagement and women’s willingness of women to have more children - a study comparing Hungarian and Swedish families concluded that the more equal division of domestic activities within the family, the greater the probability of having a second and even a third child and the relation was true both for Hungary and for Sweden, in spite of a totally different cultural context.[4]

So far, so good, but can we really make men to do more at home and to take care of the children? Or maybe “daddy quota” is only for more “progressive” societies, while usually the quotas mean “forcing” the fathers to take a break from employment against their will and once they come back from their paternity leave everything goes back to “normal”? Here the research on men’s behaviour during parental leave confirms again the importance of individual and non-transferable entitlements for fathers. For example, according to Nepomnyaschy&Waldfogel, fathers, who take longer paternity leaves (at least two weeks), are more likely to still performdaily child care tasks, like diapering, feeding or bathing nine months later than those who take only a short leave or none at all (Figure 3).[5] A generally positive relation between policies aimed at more gender equality at home and increase in father’s involvement was also confirmed by the research results published by Jennifer Hook.[6] This phenomenon of a more intense sharing of domestic work by men after they take paternity leave might be interpreted as a kind of “spill-over” effect from the care work done by men at the time of such leave.

If we now come back to the link between fathers’ involvement and women’s attitude towards childbearing (especially after the first child), we might have the answer to why daddy quota works for increasing fertility. In other words, women do not want to have children with men that do not participate in childbearing, and the best way to encourage fathers to change their behavior at home is to offer them individual and non-transferable entitlements to parental leave, for a considerable amount of time. Thus, the ultimate effect of daddy leave goes far beyond its immediate goal, i.e. to improve gender balance at home.

But the schemes need to have at least three basic features (at the same time):

I am not saying that everybody should have large family. Some families would just opt for one child, no matter what, other couples would decide to stay childfree, while some would think about the World’s overpopulation problem and adopt a kid. But those, who want to have children, all of those who plan to have at least two, need adequate support and this support cannot be gender-blind. Do the European governments want to increase fertility? Then they need to get fathers to work more - at home.

[2] I made this remark thanks to an exchange with Hrannar Björn Arnarsson.