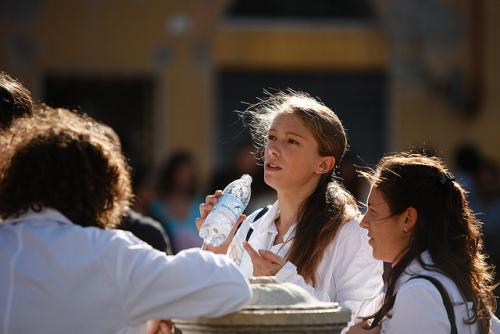 A gender-responsible science and technology is a way to enhance the quality of life for both women and men, in Europe and worldwide. Based on this assumption, since January 2014, as part of the TRIGGER project (TRansforming Institutions by Gendering contents and Gaining Equality in Research), five gender equality action plans are being implemented  in five Universities that differ in dimension, scientific field and geographic location[1]. The scientific areas involved in these activities are biology, medicine, physics, engineering, architecture and city planning[2].

Besides addressing gender inequality in several aspects of academic life, these action plans share the ambition to contribute to mainstream gender in research design and process as a crucial lever for structural change. For each partner the most appropriate actions i.e. training, research tests, creation of gender balanced research groups and chairs, have been identified to draft a self-tailored action plan. Most actions are planned to last beyond the project activities.

After one year of implementation, despite some difficulties and unforeseen obstacles, first results have been achieved and in some cases already consolidated. Following information about the University of Pisa action plan and its implementation.

Re-launching long-term commitment for gender equality in S&T: the experience of Pisa

In order to design an effective action plan for the Pisa University we took into account the lessons learned from previous projects about gender in science, as well as the specific structural features of our organization. Gender mainstreaming is the general strategy connecting all the issues related to “gender in research”: women in research, research for women, research about women. At the same time, we have considered that, in order to leave room to changes, programmes should last long enough to manage many factors and levels at the same time as well as the conflicts that any change brings along. More time means the possibility to prove the engagement of leadership, as well as that of the women in the organizations, be they scientists, technicians or administrative personnel (PRAGES project, 2009).

For what concerns the structural features of our organization the first thing to be mentioned is a general downsize of the investment in gender equality. In fact, in 2013[3] the Equal Opportunities Committees at University level were replaced with new bodies with more nuanced and generic competences in the field of gender equality. Other factors shall be mentioned: the present picture shows low figures of women in scientific and managerial top positions, the issue of a gendered approach to science seems to be relegated to social and human sciences, and involving natural sciences and engineering extremely difficult.

An overview on structural characteristics: Pisa University is one of the oldest and largest Italian universities, with 52.000 students and 1.552 professors enrolled in 20 Departments. The percentage of women in each step of career is in line with the national average: female are 52% among undergraduate students, 51% of graduate students, 42,8% of researchers, 33% of associate professors, and 15% of full professors[4]. The gradient of exclusion is more pronounced in the scientific field, this is why we involved in the TRIGGER project six science and technology departments, specifically in the medical and engineering fields as they hold two negative records: the highest rate in the expulsion of women at each step of the scientific career (Medicine), and the lowest rate of females, which however remains constant at all levels of the scientific career (Engineering). 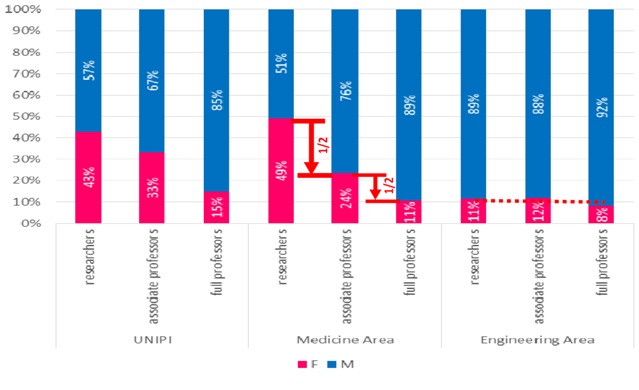 To promote a more balanced gender distribution in Pisa University we are promoting an integrated action plan working at two different levels: a long lasting set of institutional practices aimed at implementing structural changes leading to gender equality and equal opportunities, and content-oriented initiatives, aimed at demonstrating the usefulness of gender priorities, standpoints and peculiarities within research and innovation processes.  In order to be achieved gender equality in science needs a change in research practices and an increase of women's participation in science. The action plan foresees awareness raising activities addressed to young scientists and to the staff involving them in a participative solution planning.

We organise an annual training course on the leaky pipeline phenomenon, which is closely connected with the mentoring programme for female PhD students and research fellows that will be launched and implemented during the project.

During the recruitment phase for the first edition, we were afraid of not reaching our target number and launched a communication campaign and the result was that we got instead many inscriptions! The loss of female talents is clearly perceived from young female researchers. The obstacles and gender bias are felt in the peer relationships among colleagues, rather than as an effect of an unfavourable institutional context.

“I don’t know how to communicate with my male colleagues … I can’t … I have no dialogue” (Woman, 36 years old, Assistant Professor).

The institutional features, understood as a hierarchy, emerge clearly as a hindering factor among women at a higher position of academic careers. Specifically among the younger Associate Professors:

“Then you have to hear that you have not been proposed because ... well … as a grace, you know, since you have a little baby ...” (Woman, Associate Professor, 49 years old).

To foster change in organisational culture and behaviours, we have institutionalised a Delegate of the Rector in Gender Studies & Equal Opportunities, as a connecting member between the University Administration and the TRIGGER group, and we promote a series of actions (research activities and dissemination activities) focused on work-life balance. To change gender stereotypes on science and technology and overcome consequent career distortions, we promote a qualitative and quantitative analysis on female careers and we will create an on-line database, which will contain subject area, research, results, and leadership experience of female scientists.

We found  out that in the medical area more women professors than men come from biology, amounting to 35% of female and 19% of male assistant professors, and even to 67% for women and 9% for men in full professors. The meaning of this difference and its impact on careers is an aspect to be further deepened.

We are particularly focusing on actions aimed at making the gender-sensitiveness of research design, process and use an ordinary feature of all research at the targeted Departments. To this end, an articulated set of actions has been devised at the six Departments, and the active participation and support of authoritative scientists (also from other universities thanks to the collaboration of the National Conference of Italian University of Equality Bodies) has been secured to test innovative research procedures, fully integrating the gender perspective (also sponsoring research fellowship/scholarship and annual dissertation awards). Based on the results of the tests conducted, at the end of the project a teaching module for PhD courses will be established, aimed to introduce the gendered aspects of research and gendered research tools and procedures in the medical and engineering areas.

This strategy found a turning point thanks to the training course on “Gender in research as a mark of excellence”, held by Katrien Van Der Heyden (Yellow Window Group). After this course, we noted a significant growth of the interest among the members of the academic staff at the 6 targeted department (75% female and 25% male).

“Finally I’ve understood what does gender mean, and how I can use that to implement my research … (..) May I have a meeting with the project staff to verify my idea and my research protocol?”. (Woman, 50 years old, Assistant Professor)

The research ideas and the requests of collaboration – from medicine and engineering areas – are increased so much that we are spending in this all our research time.

CEC-WYS (Central European Centre for Women and Youth in Science) (2007). Why Gendered Science Matters. How to Include Gender Dimension into Research Projects. Handbook

[1] The partners implementing gender action plans are University of Pisa, Italy; Institute of chemical technology and Institute of Sociology with the help of the Czech Academy of Science, Czech Republic; Birkbeck College of London, United Kingdom; Université Paris Diderot, France; Technical University of Madrid, Spain). The project is coordinated by the Italian Department of Equal Opportunities. The research association ASDO, expert in gender issues, based in Italy, is playing the role of technical assistance and evaluation. The project has been funded by the EC under the FP7 and it is co-funded by the Italian Government.

[2] An advisory unit for gendering research, formed by Londa Schiebinger (Stanford University, USA) and Ineke Klinge (Maastricht University, NL), has been created by the consortium to support this process.