The GARCIA project
gendering the academy and research 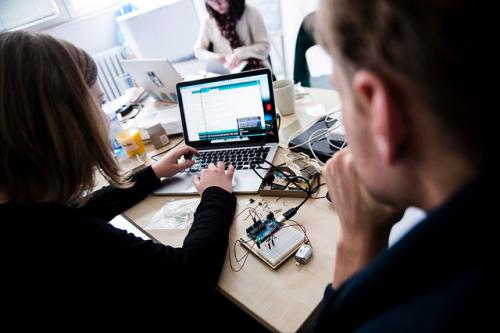 Towards a 'care deal' for the European Union

The Covid-19 crisis has unearthed a long pre-existing and much deeper care crisis. The EU Care Atlas illustrates the urgent need to look beyond the mere gender pay gap to understand the full extent of gender imbalances

Gender inequalities in the platform economy

Recovery without women in Hungary

Nowadays there is a wider debate about the early stages of scientific careers. Young researchers are facing growing demands within Academia and Research, such as a loss of autonomy over time management, increasingly working on short-term projects and growing time pressure. The increased flexibility within the labour market, the processes of commodification and the decrease of resources invested in research and development have altered the management of human resources also within universities and research centres[1]. As widely shown by previous studies[2], such phenomena are characterized by deep generation and gender differences and the scientific labour market is not an exception[3]. Female researchers at the early stages of their scientific careers, in European countries but also in the United States, are often in precarious positions, either occupying part-time jobs or fixed-term research contracts. Furthermore, the traits defining the academic environment in knowledge societies seem altogether antagonistic with the possibility for young researchers to dedicate their time to their social, family and private life[4].

Given this scenario, that we know not only because it has long been the subject of our research work, but also because it corresponds in reality to our work experience in departments where research groups are increasingly composed of people with unstable positions and with limited prospects of stabilization, we decided to plan a project to deal with gender asymmetries in science, by considering specifically the instability at early stages of the scientific career and their implications from a gender perspective.

To this end, we constructed a partnership composed by seven European Universities[5] and research centres representing different EU countries, that has led to the GARCIA project -  Gendering the Academy and Research: combating Career Instability and Asymmetries. The project is concerned with the implementation of actions aimed to combat gender inequalities in academia and research centres, through the implementation of measures undertaken at cultural and structural levels in organizations, particularly concerning researchers with a temporary position.

The project is focused both in STEM (Science, Technology, Engineering and Mathematics) and SSH (Social Sciences and Humanities) departments of the involved institutions. At the University of Trento (the project coordinator) actions will be implemented in the Department of Sociology and Social Research and in the Department of Information Engineering and Computer Science. By involving both STEM and SSH disciplines, the aim of transforming academia and research towards a more gender equal environment could be extended to all disciplines, by putting into practice the best systemic organisational approaches. Macro, meso and micro level analyses are followed by the implementation of the Gender Action Plans, which are mainly directed to: gender regimes; gender equality in management and decision making; awareness raising on gendered practices; everyday working conditions; recruitment and selection processes; the Leaky Pipeline phenomenon.

In addition, the project also foresees a monitoring and evaluation process which assesses institutional progress and structural changes caused by implemented measures, while supporting at the same time the learning process between beneficiaries.

In 2012 the European Commission published the report Structural change in research institutions: Enhancing excellence, gender equality and efficiency in research and innovation, identifying five main problems faced by research institutions in terms of gender inequality: 1) opaqueness in decision-making: 2) gendered institutional practices; 3) the limited presence of a gender perspective in research and curricula; 4) gender bias in the assessment of excellence; 5) the lack of gender sensitive human resources policies.

In order to tackle these problems facing research institutions, the GARCIA project proposes some innovative actions particularly focused on early stages of scientific careers, with the aim to foster gender equality in academia and research. In the following, we briefly describe the strategies that we have elaborated go in the direction of finding solutions and implementing the necessary structural changes in the organisations involved in the project.

The first step of the GARCIA project has been the mapping of the institutional and societal environments, notably in terms of opportunities and constraints offered by various welfare and gender regimes in structuring the opportunities for women employed in science. The underlying assumption is that expectations and possibilities to start a scientific career are deeply embedded in a given national setting in terms of industrial relations, welfare regimes, equal opportunity policies, etc.

Until now national mapping have been completed and we are working at the comparison between the different countries involved in the project.

The management and power structure of science and higher education has undergone restructuring in recent years with business logic, increasing economisation and influences from the private market. These new trends strongly relate to the issue of participation: who is involved and who is excluded. A first action to achieve more transparency in decision-making should be therefore to balance the gender composition of committees. However, the numerical balance between women and men does not automatically guarantee a gender balance. This is the reason why a gender budgeting tool is foreseen in the organisations involved in GARCIA, being aware that management and budgets reflect priorities and power structures. Indeed, our overall aim of action is to map the impact and the potential gendered consequences of recent trends in management and financing of higher education.

Raising awareness on gendering practices and practicing gender in organisations

The aim of removing gendered bias from institutional practices is pursued by the quantitative and qualitative analysis of the involved organisations. Training courses for staff and researchers are planned both in STEM and SSH departments, with the main aim to support researchers at the early career stages.

In order to improve the quality of the scientific system and the scientific knowledge production, gender equality and diversity represent a key tool to promote excellence and enable sustainable success. The criteria used by academia and research centres to define scientific excellence are allegedly neutral and objective. However, “excellence” is not a gender neutral objective notion, but rather a socially constructed constantly changing process. Constructions of excellence are intimately related to gender, class and ethnic inequalities, which may be produced and reproduced in everyday interactions. The GARCIA project wants to explore the processes and practices in which excellence is constructed and specifically the recruitment and selection for academic and research tenure track or permanent positions. Indeed, the construction of academic and research excellence is particularly salient for fixed-term researchers, as the label of excellence is the key to their inclusion or exclusion in academia and research institutions.

The last problematic area indicated by the European Commission in its report on structural change in research institutions is the progressive decrease in the representation of women in science and technology at growing levels of the formative and professional route, described through the metaphor of the Leaky Pipeline. The project adopted an innovative perspective: instead of looking at the leaky pipe from the point of view of women and men involved in academic and scientific career in STEM and SSH fields, the perspective of PhD researchers who left academia/research is adopted. The “brain drain” of skilled people holding a PhD is therefore analysed from a gendered perspective, giving voice to “leaked” people. Afterwards, the obtained results shall represent the basis on which to elaborate an innovative mentoring program.

The GARCIA project promotes a participatory approach by involving researchers at different stages of their scientific careers. The management structure has been designed in order to valorise the members of each national team, independently of their academic status. Therefore, with the aim to collaborate most effectively, the management strategy aims for flat structures, rich in communication and based on consensus decisions. Indeed, a task-based team approach is adopted: each national team is responsible for the timely implementation of a part of the work plan, but in close cooperation with the other teams. This approach can ensure an extensive exchange and a creative and synergic environment for innovative solutions and policies in the promotion of gender equality in academia and research centres.

The project has a duration of three years and currently it has reached the end of the first one. Until now most of the actions have focused on the national mapping and on the organizational diagnosis, still in progress, which is tailored to the specific context and needs of each department involved in the project.

The first results concerning the Italian context show that over the last ten years, the Italian academic system has been characterized by some general dynamics which have significantly reduced the chances of pursuing a scientific career for the new generation of researchers, as the significant increase in the number of PhD holders, the constant cutbacks on public funding for research and a growing flexibilisation of the early stage research positions. The combination of these processes produced a relevant increase in career instability. At the same time in this new scenario female disadvantage does not seem to have reduced. While there is an equal gender distribution among PhD candidates and postdocs, women continue to be underrepresented among the subsequent positions on the career ladder. Notwithstanding the Italian university system still lacks of policies and practices explicitly targeted to promote gender equality in science sector.

Another research action partially completed concerns the analysis of the actual practices adopted in the selection processes. Here the first outcomes show that the procedure’s steps are characterized by some ambivalences and by a discrepancy between the formal and the subjective criteria adopted for the selections. Gender issues, although seem to have implications on the career opportunities of women and men, do not emerge as dimensions to be considered in the evaluation processes, while an idea of meritocracy based on gender neutrality is prevailing. The only exception regards the issue of motherhood, in view of the scarsity of public care service for this target, compared to other European contexts.

Further activities – such as a web-survey targeted to PhD researchers who left academia/research; the financial and governance framework's analysis of the academic institution; the mapping of gender dimension in curricula and research; the interviews with researchers with a temporary position – are currently underway and they results will be the basis for the development of the measures aimed to implement structural and cultural changes in the involved academic departments.

Ylijoki, O.H. (2010) “Future orientations in episodic labour: Short-term academics as a case in