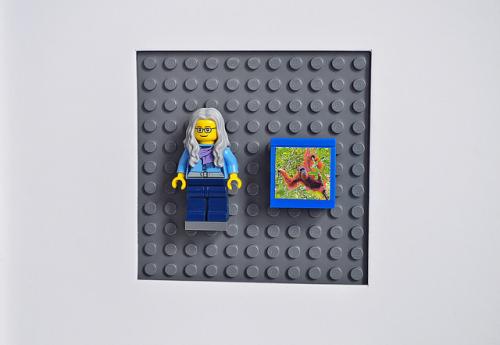 Addressing change to eradicate the causes of gender inequality in science. A huge challenge that the University of Milan is facing through the STAGES project

STAGES as a whole: the challenges

Unequal outcomes in scientific careers for men and women derive from multiple causes, whose relative weight in each institution (and even in different departments) remarkably varies. In building its Gender Action Plans, therefore, STAGES tried to apply an integrated perspective, identifying measures of different kinds, and selecting the more suitable and needed in each institution, based on a preliminary recognition.

The dynamics of change was also addressed. How could the activation of a change process be planned, which was to affect both formal rules and the actual behaviours of men and women at all levels in the organisation? To this aim, different tools were identified in each plan, supporting both top-down (leadership involvement) and bottom-up strategies (involvement of researchers, administrative personnel, etc.). Moreover, the different types of negotiations to be activated for redefining gender arrangements in the organisations were highlighted, including the symbolic, interpretative, institutional and operational dimensions.

The result is that the five plans have many actions and tools in common, even though each shows a particular mix, and that implementation mechanisms have consciously addressed the different dimensions of the change to be negotiated, and the relevant actors to each time involve.

STAGES at University of Milan[1]

When the Interdepartmental Centre for Women and Gender Differences (now known as Genders[2]) began to develop the Gender Action Plan for the Università degli Studi di Milano as part of the application process for a structural change grant from the European Community, it already had some significant experience. We had completed two projects on the subject of women and science that had left us, among other things, with two important lessons. The first was how to collect and evaluate best practices  for promoting the presence of women in decision-making positions relating to scientific research in public institutions (project PRAGES). We thus had a lot of background information to help us understand what could work in different contexts and in particular within our organization. The second thing we learned was how it felt to be frustrated. The WHIST project resulted in a few interventions being tried out in different organizations, but we – myself in particular - were still left with the desire to try something for our own university.

There were a few legal and administrative issues particular toItalyduring the time we were developing our project (in 2011) that needed to be taken into consideration. The first was related to the implementation of the Gelmini Reform, and the second was related to the transformation of the Equal Opportunity Committees into Unique Guarantee Committees (law 183/2010). The latter led to a long period of transition and resulted in reforms within our University only a few months ago.

Based on our pre-reform faculty we decided to direct our self-tailoring plan mainly to the Faculty of Agricultural and Food Science and the Facultyof Medicine, with a few specific interventions being opened up to the whole university. Tackling the issue throughout the entire institution immediately would have been impossible due to its size and multiple campuses.

The Faculty of Agricultural and Food Science was a perfect test site for a number of reasons: in one of the departments half of the professors were women, while the other had no women professors at all. There was a relatively small number of untenured staff with which we would implement the changes, and also a recently formed network of women researchers who had already demonstrated a keen interest in our work. It was a perfect department to implement changes aimed at improving the scientific careers of young women researchers.

The Faculty of Medicine on the other hand was well suited to carry out the analysis of how gendered that discipline is. Medicine is the most obvious discipline in which sex and gender should be considered an important factor, yet it continues to be not considered (in the 7thFramework Programme only 28% of the health projects considered sex and gender relevant). So that is how the workshops on gender in medicine were born. It was impossible to entertain the idea of carrying out any further interventions due to the huge number of people in the Faculty of Medicine[3].

Both faculties would have been perfect for the topics we wanted to research for EXPO 2015, Feeding the Planet and Energy for Life, the themes of the Universal Exposition that Milan will soon host, and which coincides with the end of the STAGES project (not counting the sustainability plan). That’s how we came up with the idea for the Women and Science week during EXPO.

Keeping these themes in mind we got to work trying to come up with the most effective interventions for our Gender Action Plan, and to do that we decided to gather data and interview the researchers.

The picture that started to emerge from our data was that of significant vertical segregation throughout the institution and across all disciplines. Our findings basically confirmed the leaky pipeline, with a majority of entry-level and untenured positions being held by women and then gradually dropping from there to only 27.7% of full professor positions being filled by women. These facts are upsetting to anyone who aspires to gender equality, but could appear less dramatic if seen by someone who interprets this data differently. According to people who support the ‘change is happening’ theory, it’s only a question of time and the progressive feminization of the sciences will lead to a change in our institutions. However we know that this isn’t the case, and according to calculations made by Rossella Palomba in “Sognando la parità” we would have to wait until the year 2138 to reach parity among professors.

Looking at the different disciplines we began to see the emergence of an even more marked vertical segregation in the health sector (see Figure 1): only 79% of women were research fellows and just 14.9% of full professors were women. 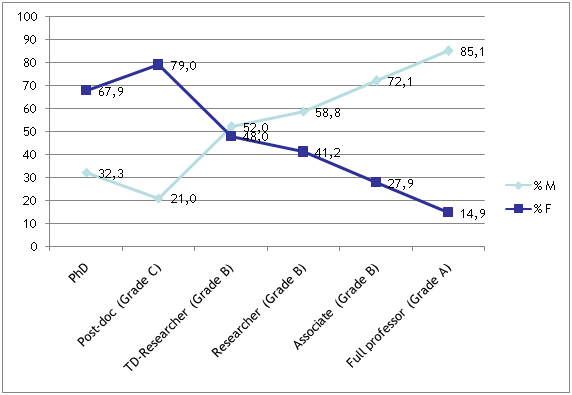 For this reason we decided to insert into our action plan a study about medical careers, which is currently ongoing and that we hope will yield some explanations and reveal the inner workings of careers in this field in which women are well represented. This study explores gender inequalities in medical careers within five large health organizations (hospitals) in the Region of Lombardy.

Through our interviews we began to see a need to internationalise. We found that the European grant application process was considered highly competitive to the point of being almost impossible. In order to understand whether or not that was true we decided to research that assertion. The numbers from She Figures tell us that in the sectors chosen by the departments women are doing better than men, even if they apply less frequently. Then we looked for information about participation in European grants and grants related to topics that the Facultyof Agricultural and Food Science received grants for (local, national and international). Women seem to be excluded for the most part from local and national financing networks, and they participate less in European calls for proposals, but when they do they are as likely to receive grant funding as men.

The strategy was that of providing services explicitly targeting women and designed according to a gender perspective, but relevant (and open) to everybody. The interesting feature is that this practice reverses the normal situation, where it is women who generally have to adapt to programmes and services thought in a “neutral”, that is, male perspective.

We do not have room to describe all the interventions in detail, but we did want to complete our integrated plan of action by addressing two important groups of people whose participation is fundamental to achieving any significant change: students and top managers. For the former group we held workshops on gender in medicine, equal opportunity, and scientific careers. For the latter we provided crash courses on equal opportunities and gender stereotypes in science for top management.

After three years, all the partners can exhibit first structural changes, that is, changes which have become permanent features of the organisation. Some, among the many, include: the institutionalisation of a standardised annual report devoted to gender equality indicators and measures at all the 67 institutes of the Fraunhofer Gesellschaft, which will be continued by the headquarters following up the STAGES practice; institutionalisation of the STAGES research group in charge for the sustainability plan at University of Milan; the creation of a permanent gender module in the mandatory training of research leaders at the Aarhus University; the institution of the Centre for Gender Equality in Research at UAIC, which will take on the continuation of the Action Plan; the funding of the young women researchers’ network at the Radboud University, as well as the launch of integrative action plans at the participating departments. The teams, moreover, are now reference points for their organisations in terms of human resources management, and are regularly consulted by the leadership.

However, it took on average a full year of work to get the teams to be visible and relevant in the operational procedures of the organisation, while frequent changes in leadership constantly jeopardise the achievements. This is why this last year of the project is devoted to sustainability strategies, to try and secure as many innovations as possible among those introduced by the project.

In terms of knowledge results, the accompanying research highlights the variability of the features and outcomes of the same actions in the different contexts, as the different meanings they assume according to local circumstances. Solutions that worked well at an institution, proved a failure elsewhere, confirming the importance of contextualisation and tailoring of actions and tools.

Also, some patterns in the activation processes of local actors emerged, supported by multiple examples. Among them, the most successful are those where, according to different modalities, groups of people have been thoroughly involved in the analysis of the situation and the planning of relevant measures, both from the bottom-up (different kinds of women’s networks) and from the top-down (participatory models of training initiatives for different kind of leaders).

She Figures 2013, Gender in Research and Innovation. Statistics and Indicators.

[2] Beginning in January 2015 the Interdepartmental Centre for Women and Gender Differences (born in 1994) went through a reorganization process and became GENDERS – Gender & Equality in Research and Science, with the active participation of the departments involved in the STAGES project.

[3] 600 in total between researchers, associate and tenured professors plus temporary staff.