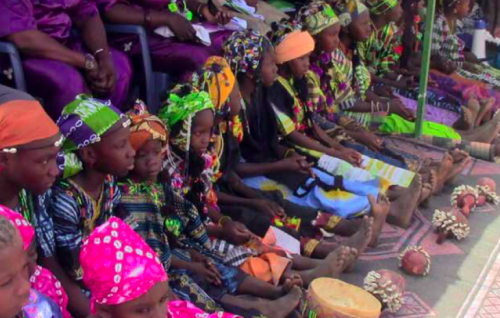 Female genital mutilation is still perceived in many countries as a symbolic step in the construction of gender identity. The practice exists also in immigration countries. But alternative rites are being fostered. Interview with Nafissatou Diop, coordinator of the Unicef and Unfpa programme "accelerating change"

Less than 20 years ago domestic workers began to demand rights and recognition. A new series shows that while they’ve made substantial progress, there is still a long way to go

An estimated 125 million women and girls living today have undergone female genital mutilation around the world, and other 3 milions are considered at risk each year, according to the last report of Unfpa and Unicef joint programme to stop the practice. «Unfpa projections show that over the next 20 years, 86 million young girls worldwide are likely to experience some form of FGM/C if the current prevalence remains unchanged», says Nafissatou Diop, coordinator of the United nations population fund (Unfpa) and Unicef joint programme on female genital mutilation and cutting, "Accelerating change". But the trend can be reverted and some important good news have been reported. We asked to  to explain the successes achieved and the things still to be done.

Female genital mutilation and cutting is perceived as a fundamental part of cultural group identity and a symbolic step in the construction of gender integrity. What are the main obstacles to change these social norms?

The ultimate decision to discontinue the practice of FGM/C rests with the women, men and community leaders who can effect and sustain change. Since change cannot be imposed from the outside, these community members can put into place a new social norm without feeling that their cultural traditions are being violated or that they are coerced or judged. The decision to abandon FGM/C must be collective and explicit.  A big challenge is engaging neighboring communities so that abandonment can be widespread.

One of the actions taken is to work on the development of alternative rites. Can you describe one of them and how you promote the new rites?

In many communities, FGM/C is performed as a rite of passage marking a girl’s transition to adulthood. It is a time for imparting traditional values and often accompanied by a celebration with dancing, food and drinks. Alternative rites of passage are not a cultural break but simply substitute coming-of-age ceremonies that preserve the positive socio-cultural aspects of the ritual, but do not require girls to undergo genital mutilation.

In Kenya, for example, as in other communities in Gambia, Tanzania and Uganda, alternative ceremonies have been well received. The alternative rites are accompanied by a process of participatory education that engages the whole community. Participating girls are given instruction on a wide range of topics designed to equip them for adulthood. These include the positive values of the local culture, life skills, communication skills, self-awareness, family relationships, sexuality, coping with adolescence behavior, sexually transmitted deseases, HIV/AIDs, gender-based violence, human rights and female genital mutilation as a violation of those rights. They are equipped to become mentors and role models for their peers and to participate in development processes in their homes, schools and the community.

Last year (2012), in Kenya, about 400 girls went through an Alternative Rite of Passage under Unfpa leadership. The community provided food for the girls for a week of seclusion where they were taught about positive interaction with boys, the importance of excelling at education for a successful future, life skills and the negative consequences of FGM/C and child marriage. In a final celebration with their parents and relatives, they celebrated mass at a local church where they were blessed and awarded certificates of recognition for committing to stay uncut. Girls who have graduated from these alternative rites continue to play an important role in their communities as active fierce advocates leading the march against the practice of FGM/C.

In which countries have the most important successes been achieved?

Success varies from country to country depending on the specific context and the support provided by various key stakeholders. In Burkina Faso, for instance, the implementation of the law against FGM/C and the coordination mechanism spearheaded by the Government has been very effective. In Senegal, on the other hand, community engagement to eliminate FGM/C through public declaration has led thousands of communities to abandon the practice. In Djibouti, the mainstreaming of FGM/C within the country’s maternal/reproductive health programmes has been exemplary.

How do you approach religious leaders and other “custodians of the culture” to convince them to abandon FGM/C?

The Unfpa-Unicef joint programme on FGM/C is working closely with highly respected and influential agents of change, particularly traditional and religious leaders, who play a critical role in the abandonment of the practice. These “custodian of the culture” have the ability to influence decisions within families and to build consensus within communities.  Engaging religious leaders, in particular, is essential as they are seen as holding the key to overturning female genital mutilation. Their position against FGM/C lends credibility in ending the practice since many of their followers erroneously believe that the genital mutilation is a religious obligation. Clarifying that FGM/C has no religious ground has been a significant step in opening minds and fostering long-term behavior change. Some religious leaders underscore that “men and women were created in the image of God - pure and beautiful” and, thus, should not be changed by man.  Religious leaders from various faiths reach out to local communities raising awareness about FGM/C while some religious scholars consult and relate with other groups who have taken a firm stand against FGM/C to learn from their experience.

Can you explain the importance of “public declaration”?

In most countries where FGM/C is practiced, the majority of girls and women think it should end. Many of these women see no benefits to the practice and have become advocates  raising awareness about the risks of FGM/C on the health and well-being of women and girls and also their human rights. In the Joint Unfpa-Unicef Programme countries, women actively engage in educational activities and public community discussions and dialogue that bring people together to openly discuss and reflect on issues relevant to FGM/C. To underscore “zero tolerance” for FGM/C, these women proactively take the lead in the collective public declarations against the practice to highlight the erosion in social support for the practice.  Their collective commitment through an explicit public declaration  is a key step in the process of real and sustained change in communities. Public declaration of FGM/C abandonment is a living testimony that change is possible, that societal attitudes do shift and that communities can choose to abandon the practice.

The last report by Unfpa and Unicef underlines the case of the pejorative terms used to refer to women who had not been cut. How are you tackling the issue of language?

The approach is framed in a language that resonate with the local community. For example Tostan, a leading NGO partner of the joint programme in Senegal, has adapted traditional human rights vocabulary used by the community to capture the sociocultural context. Recasting local experiences with their new understandings, participants become aware of and discover the universal legitimacy of human rights. Learning about human rights in a manner that is understood by the community increases confidence, especially among girls and women, who gain assurance to voice their opinions and to articulate their concerns about the practice. This approach has contributed to transformative social change, and has successfully led to public inter-village declarations of FGM/C abandonment in thousands of practicing communities in Senegal and other African countries.

The Unfpa-Unicef joint programme is actually working in 15 countries, namely: Burkina Faso, Djibouti, Egypt, Eritrea, Ethiopia, the Gambia, Guinea, Guinea-Bissau, Kenya, Mali, Mauritania, Senegal, Somalia, Republic of the Sudan and Uganda. Thirteen of the 15 countries have legislation against the practice of FGM/C.  More recently, in just a span of two years, 2010 and 2011, three countries – Kenya, Uganda and Guinea-Bissau – unequivocally criminalized the practice of FGM/C through passage of legislation.
To strengthen the legal environment, the joint programme has supported awareness-raising and advocacy campaigns in a number of countries and has provided lawmakers with the necessary tools to develop legislation.

At the moment what’s the most urgent action to be taken?

The United Nations General Assembly on 20 December 2012, with vigorous support from the African States unanimously adopted a Resolution (A/RES/67/146) urging the Member States to intensify global efforts for the elimination of the practice. Underscoring that FGM/C is an irreparable, irreversible abuse of the human rights of women and girls, and a threat to their health, the United Nations urged the States to condemn all harmful practices affecting women and girls, and to take all measures, including legislation, to protect women and girls from this form of violence and end impunity.

Can the issue of FGM/C overlap with migration? And what can be done in western countries for migrant women?

As a result of immigration, female genital mutilation is practised within some immigrant communities in Europe, North America and Australia, with some families having their daughters undergo the procedure while on vacation overseas. However, as Western governments become more aware of the practice, legislation has come into effect in many countries to protect girls by making the practice a criminal offense. For example, in Italy an Act was passed in 2006 on "Measures of prevention and prohibition of any female genital mutilation practice," also known as the “Legge Consolo.” An Italian citizen or a foreign citizen legally resident in Italy can be punished under this law even if the offense is committed abroad. In Australia, all states and territories had made female genital mutilation a criminal offence, including taking or proposing to take, a child outside Australia to have an FGM/C procedure performed. Similarly, the practice is punishable as a criminal offense under Norwegian law even if the offence is committed abroad.  In France, FGM/C is a criminal offense punishable by up to 20 years in jail. The law requires anyone to report any case of mutilation or planned mutilation.