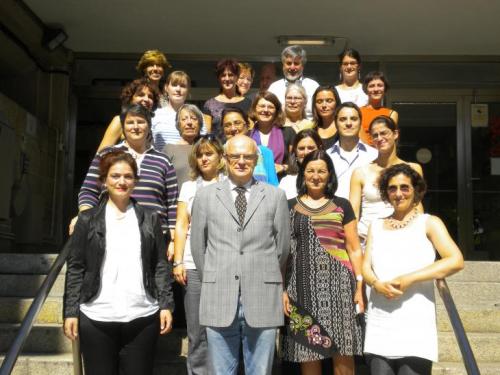 In the past two decades, various initiatives have been developed at European level to promote greater gender equality in research. In order to hasten change, in 2010 the trend has changed shifting from cultural change to structural change actions in order to defeat gender discrimination. GenisLab was one of the first projects.

In the past two decades, various initiatives have been developed at European level to promote greater gender equality in research. These initiatives were mainly focusing on empowering women instead of acting on the organizational context. However, the results have been extremely limited and haven’t overcome discriminatory structural and cultural barriers. Statistics show that women are still under represented in the top of scientific careers. Moving from the convincement that systemic interventions within the organisations implementing scientific research are needed in order to overcome the under-representation of women in science, the European Commission, and namely DG Research, has started to invest in projects foresting structural and organisational change. In the framework of this new type of initiatives, the GENIS LAB[1]project has been funded in 2010.

In order to reach its purpose of contributing to the success of women in scientific research organisations, GENIS LAB main idea has been, since the beginning, to define and implement a strategy based on the collaboration among scientific partners (research centres and universities)[2] and technical partners[3]in the identification of actions to promote organisational and cultural change in order to defeat gender discrimination.

The main approach, as for other projects working in the same perspective, has resulted in the definition of Gender Equality Plans[4]. In concrete, it meant to analyse the state of the art of the organisation from a gender perspective, to identify priority areas of actions and to define a plan of activities, including a list of objectives to reach at mid and long terms. The figure shows the process of definition, implementation and monitoring of the Gender Equality Plans in Genis Lab partner organisations. 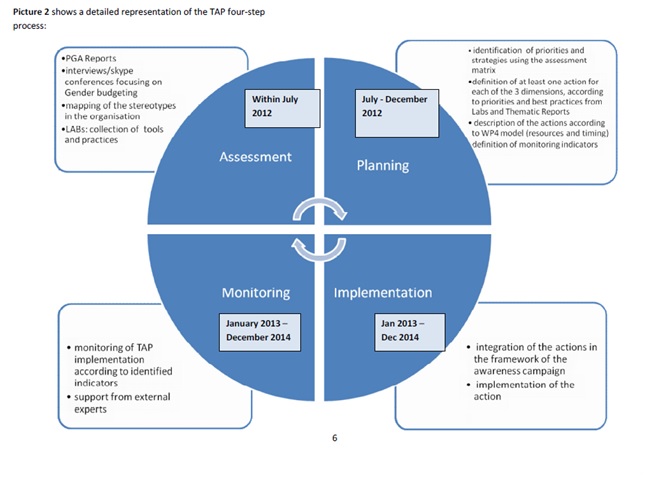 Each scientific organisation started its journey towards a greater gender equality from a participatory gender assessment. The methodology adopted to implement this phase was the Participatory Gender Audit[5].This approach allows to involve, in a participatory way, organizational key persons in interviews and focus groups in order to acquire baseline data, but also to activate an internal debate on the need to consider the gender perspective as a key element in the Scientific Community and in the organization. In other words it gives the opportunity to discuss with individuals and small groups what it means, in concrete, to reflect on the gender perspective in a scientific organization.

This very first project stage, as well as the following, have shown how difficult it is to reflect on gender equal opportunities in the scientific community where excellence is considered as the key for making a career and excellence is perceived as a gender neutral issue. In all the organizations it always came the point when someone in the discussion, mainly women, pointed out that being an excellent scientist required to make a choice and to dedicate one's life to science, as a mission. The choice meant not having time left for other aspects of life, often including building a family and/or providing care activities, the latter still being perceived as a women-mainly responsibility.

Dedication is perceived as a key component of excellence and as the main obstacle for women to develop their careers. This attitude tends to persist despite the changes affecting the way research activities are implemented (new paradigms, new technologies) and mainly in the elder generation of scientists, contributing to a friction among generations in the organisations.

Moving in this general framework, in GENIS LAB the Gender Equality Plans have been structured around three main organisational dimensions, interacting together. The first dimension, Organizational culture and stereotypes[6], focused on identifying gender stereotypes undermining scientific organisation, pointing out the negative inter-correlation between gender stereotypes and science stereotypes[7] and giving evidence on how these stereotypes influence organisational resistance to change. We consider science as gender neutral per definition while it is highly male dominated. A scientific paper on how to overcome these resistances has been produced by Flavia Zucco.[8] The second dimension, Human Resource Management policies and practices[9], resulted in the identification and implementation of a set of policies and practices tailored to face organizational challenges, as emerged from the gender assessment phase. Among the different initiatives a special mention goes to INFN, the Italian partner. Following up on the results of the PGA, an innovative pilot system for HR management, competency-based and free from gender bias has been developed. The system was inspired by CERN Competency based system, as CERN has a similar mandate than INFN. With support from technical partners, the INFN Genis-Lab team conducted participatory focus groups to collect colleagues ideas on the values and the core behavioral competences needed to work well in their organisations. “Respect for differences” has been included in the core values of the institute mission statement. The third dimension, Financial dimensions and gender budgeting[10], focused on how financial choices reflect the dominating culture with related power relationships, as power is created through the concentration of resources. Scientific partners focused on the importance when addressing gender equality to understand and monitor how resources are distributed and what effects the assignment of resources has on each gender. In the framework of gender budgeting in Genis Lab together with financial resources, space and time as resources have been considered. The analysis of time management not only focused on the distribution, between genders, of housework, family care and work, but also, regarding the time dedicated to work, it looked in detail at time management procedures for the various activities required in doing research.

At the end of the 4 year process, some general conclusions have been included in “Achieving gender balance on the top of scientific research – guidelines and tools for institutional change” [11] can be drawn. The Genis Lab experiences have shown that is very important to start the change/innovation process from the creation of a baseline in order to be able to monitor developments concerning change and gender equality. Involving organizations since the beginning in creating the base line (i.e. via a participatory audit process) is already part of the process of change. It is also important to recognize that scientific research institutions can rarely count on internal change management or sociological capacities. Since the outset, it should be clear that internal project teams need to be established with full and continued management support, and specific capacity development actions (on gender analysis and planning, change management, advocacy and lobbying, as relevant) should be foreseen in support of internal change agents.

At the same time the exchange of information/knowledge between technical and scientific partners has been crucial in order to define the fact that Universities and Scientific Research centers are “special forms of organisations”, in which the organization’s specific level of autonomy has continuously to struggle among different forces: the International Scientific Community –which gives the rules for the definition/recognition of excellence; the National Research Policies and Funds and the single senior researcher’s autonomy in research. The organizational level of autonomy and the identification of different levels of power of different stakeholders have, of course, a huge impact on determining structural change.

In addition, in the framework of a project dealing with different cross cultural issues, systematic and continued efforts needed to be done to be sure all partners shared the same intendment on the words they used (defining and re-defining is part of the process of change). All organizational change initiatives face resistance, and this is expressed in multiple ways. In the case of Genis-Lab, although there was not explicitly resistance against gender equality in science, many partners found it difficult to accept that gender disparities may be related to the negative interplay between gender and science stereotypes. Finding internal and external alliances with the right stakeholders, planning negotiating steps and procedures, engaging and building on common interests of different groups within the organization are all crucial elements for success.

[1]The Genis Lab - Gender in Science and Technology Lab project[1] is one of the first projects funded under the 7th Framework Programme, in the stream “women in science - structural change”. Started in January 2010, and ended last December with a huge Conference in Dresden[1], during its 4 years it aimed to promote structural changes in a group of selected scientific organizations[1] in order to overcome the factors that limit the participation of women in research. Detailed information are available on project website; a live tweet of the conference can be found on project website

[4]labelled in the framework of the project TAPs – Tailored Action Plan.

[6]This dimension was implemented under the responsibility of Associazione Donne e Scienza,

[7]See on thishttp://www.ingenere.it/en/articles/science-and-prejudice, elaborated by Francesca Molfino and Flavia Zucco on the basis of the Genis Lab experience

[9]this dimension was implemented under the responsibility of ITC ILO

[10]this dimension wasimplemented under the responsibility of Fondazione Giacomo Brodolini,