Decentralized bargaining can open the ground to conciliation as well as to the testing of innovative forms of work organization. Three good examples to show it's possible

Over the last few years,  from the social and demographic point of view, as well as from the economic and cultural, many changes can be observed. A concrete answer to these changes could be territorial in nature, even given the stability restrictions imposed by Europe. Increasingly, companies are called upon to meet their employees’ needs for flexibility and work-life balance, not only through the cooperation of local social and political representatives, but also sharing their own needs with those of other companies (the case of a company network will be explained hereinafter).

Lombardy is a representative context for the changes described above.Although there’s an increasing level of unemployment, the impact of its gross domestic product on the national level can be compared with the impact of the German gross domestic product on the European level. In Lombardy it’s been demonstrated that more available social services can be guaranteed as well as more efficient public and private resources management  through the involvement of workers, companies and families.For example, since 2012 (1), financial initiatives for companies have been set up, thanks to calls for tendersthat promote and encourage company practices aimed at welfare and the achievement of agood work-life balance.

Further initiatives stand out in Lombardy. As of 2012, the Lombard Chamber of Commerce Association haskept a collection of good practices, awarding the best ones in the field of Corporate Social Responsibility; notably the companies that enhance ethical behaviours in their relationship with customers and suppliers (for example respecting the environment), or actively support the work- life balance of their own employees are awarded. (2)

A more recent initiative is the “Workplace Health Promotion” program. The aim of this program is to enhance the health and wellness of people in the workplace, beyond  legal obligations. Companies that choose to join the program must implement a triennial plan of initiatives to promote the health and wellness of their own employees. The local Health Authority System supplies methodological and scientific support to the companies, as well as network management, in cooperation with Confindustria Bergamo. Results obtained in terms of decrease in sickness rate and health improvement are measured. One of the possible advantages for the future, could be a reduction in the cost of insurance contributions due from the companies to the Work Injury National Labour Institute.(3)

The use of decentralized collective bargaining, at the core of actual debate, especially after the signing of the new “Testo Unico sulla rappresentanza” last 10th January 2014, can contribute to the development of different welfare solutions, both at a company and territorial level, notably with regard to the personalization of working time or to the flexibility linked to work-life balance.

Below, 3 cases of Lombard companies enhancing work-life balance are shown in detail.

Lubiam, a company located in Mantova  making clothes for men since 1911, where women represent the 85% of labour force. Since 2008, despite the impending global crisis,, the company has been trying a new form of flexibility through which women working in tandem are able to deliver the product, sharing the responsibilities and by combining tasks and skills (4). Furthermore, working hours can be reduced when male and female workers have to balance work with family duties; training plans can be implemented to support women that come back to work after long periods of maternity leave as well as “Family space” (a means of providing general information to  employees with work-family problems). Recently a crèche has been created in the company.  As a result of these actions, the company climate has been much improved. At the beginning, employees were a little wary of these initiatives. However, the awardfor good practices in the field of corporate social responsibilitywhich the company received fromRegioneLombardia,helped to reconcile the employees to the initiatives taken. The company have not measured the impact of these actions in terms of company costs. On the other hand, the loyalty rate of employees is very high. The Unions have signed a lot of agreements on welfare issues, but always at the company’s instigation.

Varese Cobra Automotive Technologieshave promoted active support of their employees with actions such as “Dote Conciliazione” and “Voucher Conciliazione”. The former is a contribution to working mothers returning to work at the end of maternity leave. The latter is a contribution granted to people hired after a period of unemployment. Thereare also contributions for divorced workers..More requests for part-time work have been met, up to 8% of total employees. In order to do this, in some cases workers are moved to other working centres, within the same department (e.g. Manufacturing)  There has also been a move to grant optional paternity leave to working fathers. In most cases, the company took the initiatives explained above. The role of company unions was to put forward requests for part-time on behalf of the workers. Even in the case of this company direct measures of any increase in productivity are not possible. Nevertheless, there could be a good correlation between decrease in the absenteeism rate and actions taken by the company.

Another interesting case is Rete Giunca, a group of 11 companies located in Varese and north of the Milan area, which made a legal agreement in order to offer welfare services to their employees. The company network aims to improve the working environment through the creation of incentives in public transport, and health, as well as in family care and time management, thanks to agreements with service suppliers whichallow the employees to have cheaper prices and increased purchasing power. It’s a “unilateral” answer by the company to the needto remain competitive and contain labour costs to be kept under control, as collective bargaining with unions has not being used. Union representatives are involved in the communication and the implementation of thenetwork , which was created in 2012. Rete Giunca recently joined  the “Workplace Health Promotion”, described earlier.

All cases shown feature a direct and unilateral initiative by the company, enhanced from funding at a regional level and fiscal advantages granted  by national law on income taxation (articles 51 and 100). The unioninvolvement on welfare issues is limited. One of the causes may be the link with more traditional negotiated issues, in the company where this methodis common. Nevertheless, one can see that there has been a fall in availability of economic rewards for workers ,which is demonstrated by increased emphasis on training and flexibility in second level  agreements. In the words of Dietrich Bonhoefer, “quantities fight for space, qualities complement each other (1944), (5). This kind of logic can be found in the principle “better not cheaper” whichhas been applied in German decentralized bargaining since the 90s, or, in Italy, in the current case of Electrolux.

A recent study by McKinsey (6) attempting to measure the impact of company welfare actions on productivity and competitiveness, underlined not only the advantage of the implementation of welfare services for companies and employees, but also the positive impact on productivity per worker. 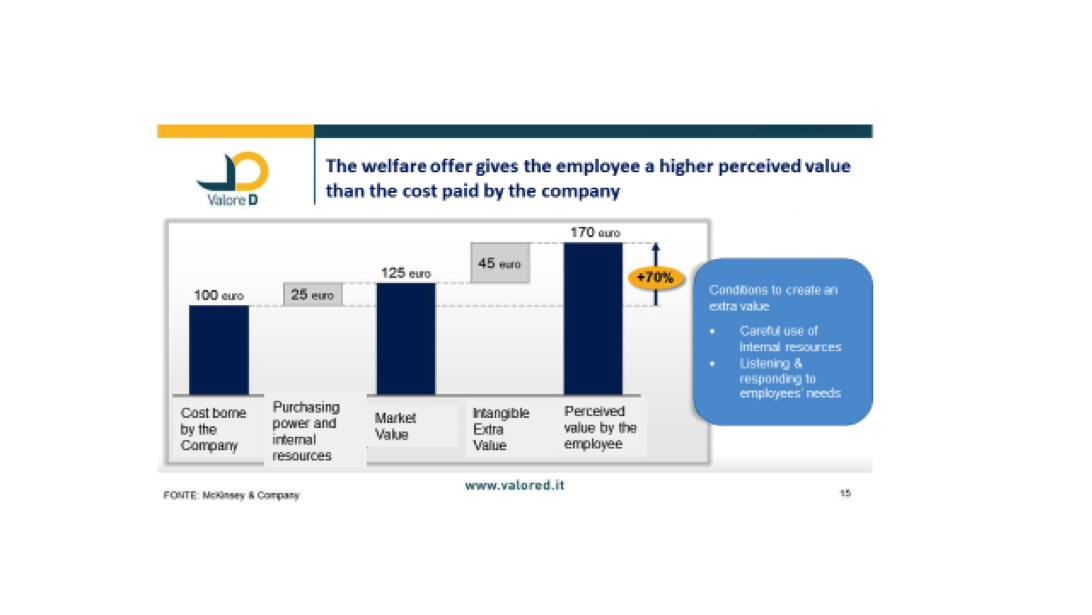 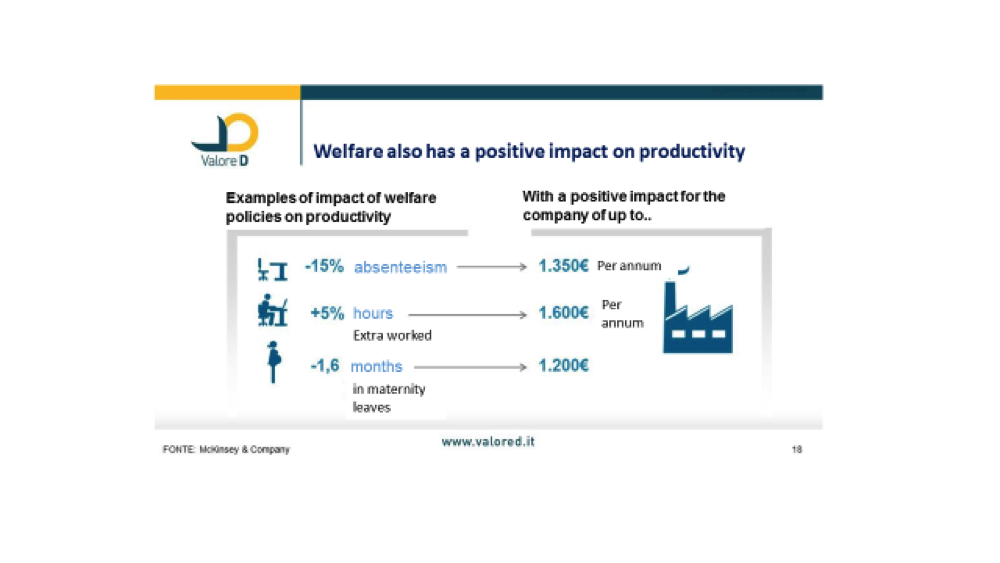 Obviously, this is just the first step on the road to convincing companies and employees to work more intensively on these issues. Now, it’s up to collective bargaining to play its part. Lombardy continues to award companies which make agreements with unions on welfare. This cannot be the only incentive, either for the companies orthe unions. A veritable cultural giant step (or leap)  isrequired, despite the absence of incentives from Europe, in order to bring about new solutions to guarantee the companies’ survival and, at the same time, the welfare of their employees, who may in turn,come to consider their company not only as their employer, but also a support in balancing their life needs.

Were union organizations to play a larger part, it might be more simple to step up such actions, advantageous as they are for workforce and company alike. As to why internal unions are reluctant to become more involved in company welafre issues, there is no simple answer. Of course, cultural factors mean unions are more inclined, to focus on the defence of workers’ basic rights (workplace, salary..). Nevertheless, a union can be a facilitator, enabling a more favourable reaction to company initiatives from the workers (the worker can always be distrustfull ofbeneficial actions taken by the company). Furthermore,  with their “third sector” contact, union organizations maybe well placed to find  potential suppliers of welfare services. In all likelihood, unions feel the obligation to hold on to their exclusive representation of workers’ needs, even in this area, in order to legitimize their role.

Finally, if company and unions era prepared to share their resources for the sake of the workers, this partnership could reap benefits for all concerned.

(1)  With the participationin the Regional Actuation Program on work-life balance practices, thanks to funds provided by Peer Opportunities Department

(3)  For further details on project promoting health and wellnes on workplace in Lombardy, see http://retewhplombardia.org/

(4)  Thanks to a project financed with funds ex article 9 of Law 53/2000, “Regulations for the support of maternity and paternity, for the right to care and training and for the coordination of times of cities.”