The European Barometer of Women’s Access to Modern Contraceptive Choice 2015 highlights important limitations in the current status of sexual and reproductive health and rights (SRHR) in Italy. The absence of a national strategy to provide widespread access to information and high-quality services results in the extremely low ranking of Italy on all of the indicators monitored by the Barometer and considered as policy benchmarks.[1] Figure 1 shows that Italy is in the bottom third of the 15 countries considered in the report, scoring considerably lower than other Southern European countries.

Figure 1. Overall ranking of countries according to all policy benchmarks

One crucial indicator in the report is the provision of individualized counselling and quality services. In Italy, family planning centers (consultori familiari) have been institutionalized in 1975 (Law 405) with the aim of supporting “responsible parenthood” through providing information on contraception and by protecting the health of women and their children. In 1978, Law 194 legalized abortion and conferred a central role to family planning centers as main providers of medical information and support for women who want to exercise their right to have an abortion. Family planning centers were also supposed to remain the nearest and low-threshold access service to obtain general information but also individualized counseling on contraception. The Barometer of Women’s Access to Modern Contraceptive Choice is very instructive also with respect to the availability and the quality of the services offered by the family planning centers. In Italy, family planning centers are often under-resourced and understaffed: in the words of the report “healthcare professionals lack sufficient support from the government in their daily activities in order to ensure quality care and counselling on SRHR” (p.45). As a consequence, individual counselling is rarely provided by interdisciplinary teams, which might affect the quality of the service depending on users’ needs. Moreover, few centers are directly linked to hospitals or specialized services, so that women are not always referred to specialists when appropriate. The full range of available modern contraceptives is considered in very few cases during counselling sessions. Importantly, family planning centers are not easily accessible outside the larger cities.

These numbers are a crude abstraction from the lived realities of women seeking to access their sexual and reproductive health rights, but they point to severe gaps in provision. For example, living in a small town outside the larger metropolitan areas can mean having to travel for hours to the nearest family planning center for receiving information about contraception or abortion, or the free contraceptive pill and condoms (in the few regions where this is an option). This will be difficult or near impossible for many young women in need. Mothers seeking a health check will face similar problems, including long waiting lists for individual counselling. 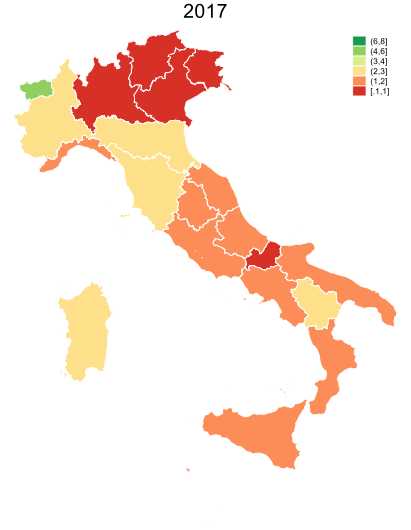 It is reasonable to argue that putting these data into perspective should give some hope, as things are supposed to have improved from when the family planning centers were established. The data from the Report of the Ministry are again of great help, as they were compiled since 1979 and reported the availability of family planning centers from 1982 on. Figure 3 shows that the situation has not improved over time for several regions, notably in the North-East and the Center. We might consider as good news that things have actually improved for several Southern regions, but we have to keep in mind that we are still talking about the same very low coverage of around 1 to 3 family planning centers per 10.000 women between age 15 and 49.

The absolute stagnation of the situation in the last years is striking, and resonates with the consistent and heavy cuts to the public health system. The data illustrate how Italy is not only far behind other European countries in providing SRHR services to their citizens, but they also reveal structural barriers for young Italians to exert their rights depending on where they live. This implies that health risks and life chances are unequal, and regional inequalities are cemented. 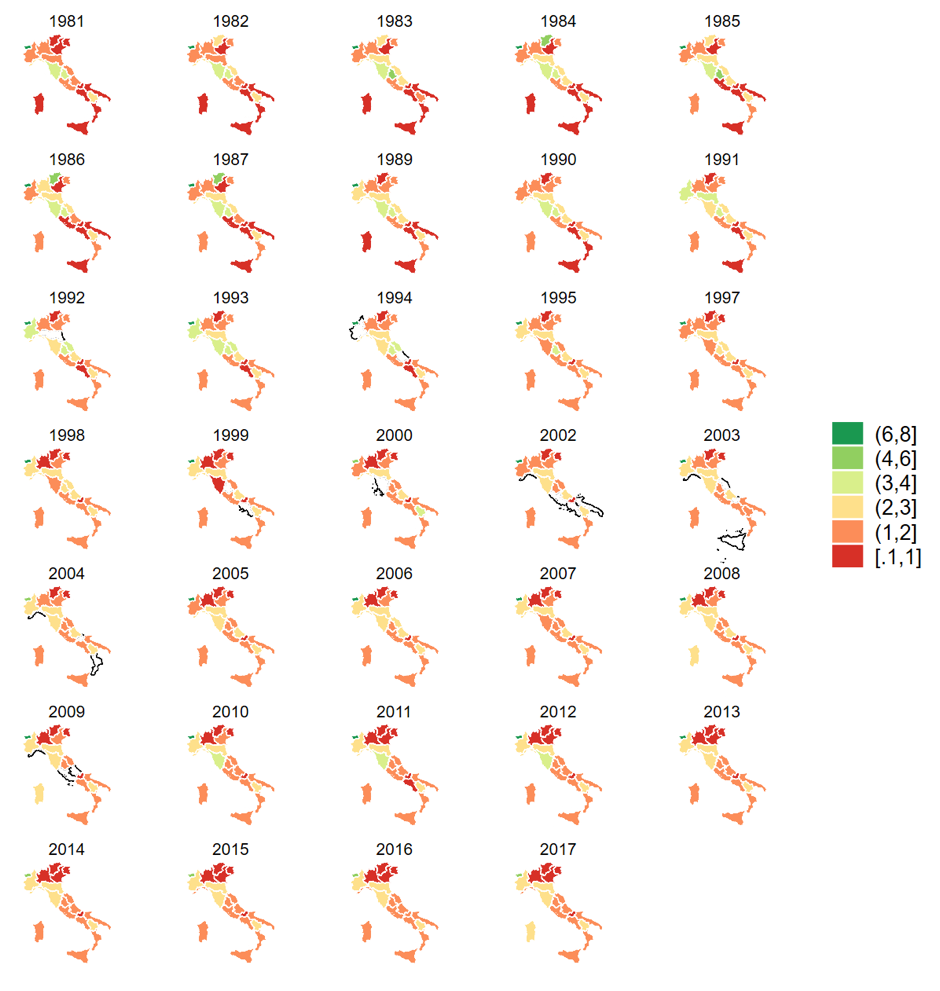 The authors want to thank Martin Gädecke at Humboldt Universität zu Berlin for excellent research assistance to harmonize the data from the Reports of the Ministry.