Becoming Ada. Fostering a culture of women in technology The EC’s “Women in ICT” report shows how having more women in ICT would pay off - for the economy, for the industry but most of all, for the women themselves

This 15 October the world is celebrating Ada Lovelace . Ada is credited with being the first computer programmer in history: back in the 1840s, she realised that Babbage's work on the analytical enginecould be used to do more than calculations and established a set of algorhythms that are widely accepted as the first attempt at software design.

Over 170 years on, however, the presence of women in ICT continues to be almost anecdotal.

Few European girls pursue ICT degrees, few women have carreers in ICT and even when they do, they struggle to reach top positions even more than in other sectors. Women active in ICT sector, the final report of a DG CONNECT initiative which aims at mapping the state of the art of women’s participation in ICTs throughout the EU, gives some revealing figures. Only 2.9% of female students have a degree in ICT vs. 9.5% among men and only 0.4% will eventually work in the sector. The share of women working in ICT is also significantly lower than that of men: only 30% out of all ICT workers in Europe (an approximate 7 million) are women and only 19.2% of ICT-sector workers have female bosses, compared to 45.2% of non-ICT workers (source: report).

According to the EU Digital Agenda, ICT should contribute to making the EU the world’s most advanced economy by 2020. In the words of Neelie Kroes, European Commissioner for Digital Agenda, women’s involvement in ICT will be a decisive factor for prompting economic recovery: “[w]e should be doing everything we can to change that, and to encourage more women to access those opportunities. It's not just good for equal rights – it's essential to our competitiveness” (Neelie Kroes’s blog, 8 March 2013). Women’s unleashed potential for ICTs is costing the European economy 9 billion Euros a year, the study reveals.

The beneficial effect of female participation can be noted also at industry level: the study highlights that organisations with more women in management display 35% higher returns on investments and 34% better total return to shareholders than other organisations. What is more, these findings are in line with the ones of a recently published report in the US. The “Women in Technology: Evolving, Ready to Save the World” report, published in February 2013, has received consistent media coverage for it concludes that women-led ICT businesses are “more capital-efficient, achieve 35% higher return on investment, and – when venture-backed — generate 12% higher revenue than male-owned tech companies” (Source: Businessweek).

If the conclusions of the DG Connect study point to the fact that the absence of women from ICT is detrimental at the industry and macro-economy level, they do so by adding an interesting element to the debate – an element that works in women’s interest. In fact, the study highlights that the gender pay gap in ICT exhibits a rather unique behaviour. 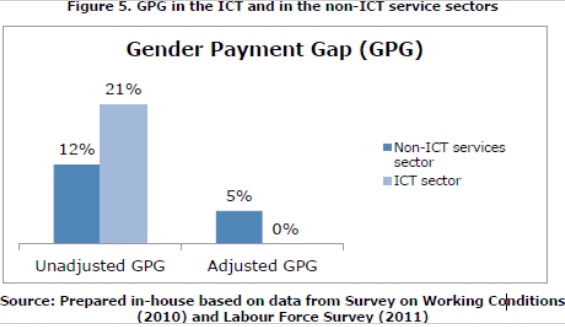 Although the unadjusted, “raw” gender pay gap in ICT is significantly larger than in other sectors, the adjusted gap (measured against age, education, occupation and other elements) drops to zero. In other words: women in higher positions in ICT, although rare, have access to wages equal to those of their male counterparts.

Women active in ICT sectorpoints to several policy actions and recommendations to increase the interest and the number of women in ICT. If many of them are transversal and could apply to several gender-segregated sectors of the economy, there are two that are particularly relevant on the day we are celebrating women in technology: these arecampaigns to boost the image of the sector among young women (and their parents) and efforts to increase the visibility of role models.

Ada Lovelace was the daughter of Lord Byron, the famous English poet and revolutionary. She could have followed her father’s literary footsteps had it not been for her mother, who instilled in her a passion for mathematics and logic. As a child, Ada was schooled by Mary Somerville, the leading female scientist of their time. When today’s celebrations and awareness activities (such as “HER in Hero”) wane away tomorrow, we will need an even stronger political and societal commitment to bring those success stories into the open, to make those role models visible, to finally let women develop a passion for ICT while giving them the means to pursue their careers freely. It will be a lot of work, but it will surely pay off.