Mini-jobs as an exit
option for companies Extensive research has clearly shown that, in practice, mini-job employees are treated unequally. Some data from Germany

Mini-jobs are a form of marginal employment offering a maximum monthly salary of €450. They are a particular form of dependent employment characterised by exemption from social security contributions and income tax; however, employers have to pay a flat-rate charge of approximately 30% on top of the 450 €. Since the same labour legislation applies to mini-jobs as it does to all other paid employment (such as dismissal protection, paid holiday, sick pay, etc.), mini-jobs are technically more expensive per hour than socially insured part-time employment, for which the employers’ contributions are around 20%.

This special status was originally justified by the supposed limited labour market attachment of married women, whose role in the traditional German family model was at best that of supplementary income earner. In order to prevent excessively low wages, working time was limited to a maximum of 15 hours per week. Labour market policy considerations were to the fore in 2003, when it became legal to take a mini-job as a second job and the limit on weekly working time was abolished. The intention behind the deregulation of atypical employment was to create a springboard into regular employment.

Since mid-2003, the number of mini-jobs has increased by a good 1.7 million to 7.3 million (mid-2015), which represents a rise of 30.3%. This increase is due primarily to a sharp rise in the number of mini-jobs taken as second jobs (up almost 1.6 million or 159.4%). Mini-jobs are particularly common in the service sector. In December 2015, the retail industry, with more than 1.2 million mini-jobbers, had the most employees on marginal pay. Various business services, which includes temporary agency work and security and cleaning services came in second place, followed by the hospitality industry with 819,000 mini-jobs and then health and social services with around 703,000. Over 60% of mini-jobbers are women, with pensioners and school and university students making up the next biggest group.

Hanau describes mini-jobs as a puzzle. “In actual fact, it’s rather a puzzle what might induce employers to hire workers for whom the non-wage costs are significantly higher.” (Hanau 2006: 809). The puzzle can be solved only by close examination of mini-jobbers’ actual working and employment conditions. Extensive research has clearly shown that, in practice, mini-job employees are treated unequally. Their hourly wage is often less than the equivalent wage for socially insured workers. They are also generally paid only for the hours actually worked and do not receive the holiday or sick pay to which they are entitled. The most up-to-date data is that gathered in an IAB survey of employees and companies carried out in 2015. This revealed that the average hourly wage for mini-job employees was only €9.30, in contrast to an average of €16.70 for socially insured part-time employees, €18.30 for full-time temporary employees and €21.00 for full-time permanent employees. Furthermore, over half of mini-jobbers earned less than €8.50 (Fischer et al. 2015: 56 f.) and no fewer than 68.6% of them are low-paid, the highest share of any employment form (Kalina/Weinkopf 2014).

The IAB employment survey also revealed high levels of non-compliance with the law. According to the mini-jobbers

Among socially insured full and part-time employees, in contrast, the comparable figures were 97% for paid holidays, 95% for sick pay and over 87% for paid public holidays. When asked about the lack of pay for sick leave or public holidays, companies responded with reasons that are deemed illegal (see Table 3). 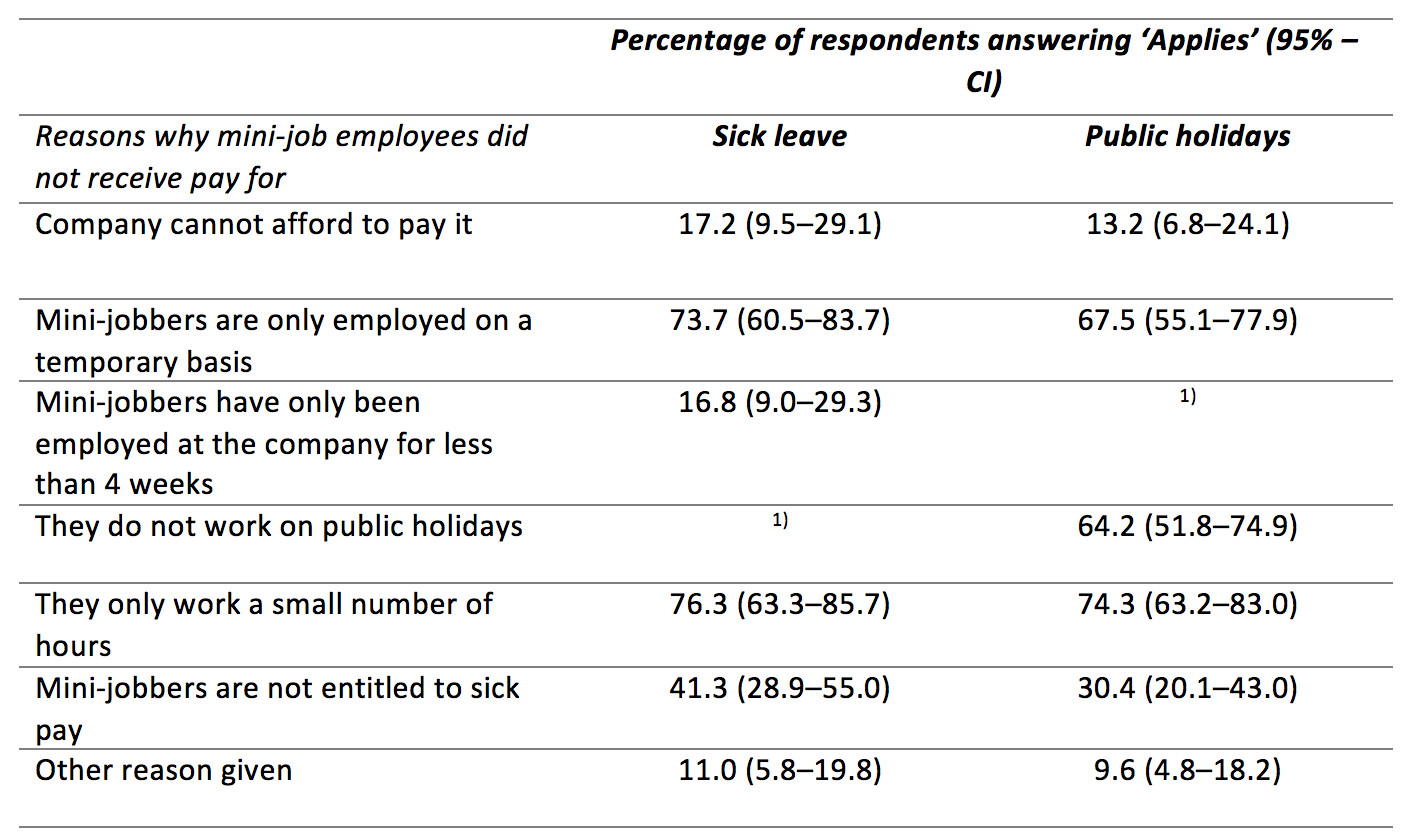 Note: extrapolated results, CI = confidence interval - 1) This reason for failure to pay was not offered to respondents as a possible answer for the entitlement in question. [Source: Fischer et al., 2015, p. 152]

This unequal treatment means that mini-jobs are, in practice, considerably cheaper for employers than socially insured jobs. In some sectors, such as retail or hospitality, this has led to socially insured part-time jobs being converted into mini-jobs. For some employees, mini-jobs are often an attractive option because the lower wages are partly offset by lower taxes and contributions; for second jobs, the tax and social security bill is lower than for overtime in a socially insured job. Married mini-jobbers benefit from their partner’s health insurance and can earn up to €5400 per year (12 x €450) tax-free without endangering the family’s tax benefits of the German income spitting tax system. School and university students, finally, are covered by their families’ insurance and the student health insurance scheme.

Mini-jobs offer strong financial incentives for both employees and employers to stick with marginal part-time employment, since the marginal costs of a changeover to socially insured jobs can be very high. It is hardly surprising, therefore, that the transfer rates from mini-jobs into regular employment are low, particularly for married women. In contrast, the transfer rate for school and university students is naturally very high: for them, mini-jobs are of course only a temporary option.

Research shows that those employed solely and permanently in marginal part-time jobs are at particularly high risk of long-term scarring effects, for several reasons. Firstly, mini-jobbers are often employed to perform simple tasks that do not match their formal qualifications and are often excluded from companies’ further training provision, which hampers their transition into better paid jobs and occupational career paths. Secondly, they are not independently covered by social security and acquire only minimal pension entitlements in their own right. Since by no means all mini-jobbers have derived entitlements from a partner and relationships are not in any case necessarily stable, mini-jobbers are more likely than average to claim social assistance and the poverty rate among them has risen particularly sharply in recent years. Employee surveys on working time preferences show that many marginal part-timers would like significantly longer weekly working times (6.5 hours more per week on average) (IAB 2012). However, the artificial income barrier created by mini-jobs prevents a gradual transition to longer working times and hence into more stable and lucrative employment.

For these reasons, a disparate alliance of actors ranging from the Council of Economic Experts via the Women’s Council to the Expert Commission on the Compilation of the German Federal Republic’s First Gender Equality Report (2011) were unable to find any justification for subsidising this employment form. Thus the Expert Commission, for example, declared that “It must be our aim (...) to make all employment relationships liable for social insurance contributions” (2011: 135). The recommended reforms range from proposals for the complete abolition of mini-jobs to permitting them only up to a derisory limit of €100 or €200. The introduction of the minimum wage[1] has re-established an upper limit on weekly working time of around 12 hours. However, the problems with implementation of the minimum wage are particularly challenging in the case of mini-jobs.

Only technical proposals are certain not to be implemented because of the strong political resistance from both employees and employers. The political parties try to avoid the topic altogether, deeming it ‘maximum trouble, minimum gain’. For this reason, it was proposed that existing mini-jobs should be protected in order to keep the number of losers low while slowly rolling out better protected employment forms with new recruitments (Bosch/Weinkopf 2016).