Women in science
the GenderTime Project The GenderTime EU Project[1], where the acronym Time stands for Transferring Implementing Monitoring Equality, is one of the so-called Sister Projects funded in the 7th Framework Program “Science in Society” with the aim of promoting structural changes in the organizations leading to the increase of women in scientific research.

The  objective of the project is to identify and implement self-tailored gender equality action plans and specific measures for scientific institutions such as: measures to increase women's recruitment, career development, networking, work/life balance, promote equal representation in decision positions, management and policy making, eradicate gender stereotypes, promote a gender oriented culture. To ensure the project's success we have a strategy: in every participating institution we involved a top-level manager in the knowledge transfer process, we call them Transfer agents. They are heads of institutions, gender equality representatives, or human resources managers, their task is to secure a sustainable implementation of gender oriented actions. Moreover, Transfer agents ensure that the knowledge transfer process extends and continues beyond the project partnership and timing.

Institutions involved in GenderTime are intentionally different in terms of size, scientific field, history[2]: these differences can be seen as a positive feature of the project, however they bring along some fragmentation, for example when collecting data such as types of contract, career progression, salaries, etc. They must be taken into account, mapped in a correct way and not avoided since the goal is to define a common language based on shared definitions.

Nowadays ranking and competitiveness is the trend: we are competing with European Universities, USA Universities, facing the Asian challenge in science and technology. Many indicators such as Citation Index and Impact Factor are used for ranking purposes. We could criticize the quantitative approach - and indeed we do- but, if this is the trend, maybe it could be useful to introduce gender equality as a new indicator when building ranking lists. Assuming this, the question is: how do we monitor and measure gender equality in Academia? What sort of indicators need to be defined in order to measure the degree of implementation of our self-tailored plans?

To answer this question we will present some of the results obtained at the University of Padua (UniPd)[3] within the GenderTime Project.

With the aim of collecting and organizing data on women's career paths at UNIPD, as a first thing we implemented the Gender Monitoring Lab. In 2014, since many data were not available, we decided to launch a campaign of data retrieval on the gender Composition of Commissions, Boards, Decision Making bodies, etc. This is what we found out so far[4]:

the Dean is a man and  has always been a man since 1222; women represent:

- 25 % in the Administration Board

- 24 % (in average) in different Academic Commissions.

Comparing these data with the presence of women in boards (17%) reported for the Italian case by the She-Figures 2012 report, we could state that comparatively at the Padua University there is more gender equality, nevertheless as we enlarge the view towards Europe (36%) the situation becomes critic.

Another monitoring tool developed by GenderTime, used at the University of Padua but also in the rest of the Consortium, is an internal survey on gender culture. The survey reflects the way female and male research staff experience their working environment and what sort of improvements (if needed) they believe to be useful to ensure equality of opportunities. The survey explored also the views on how the Department or School already promotes and manages gender equality. It focused on four areas:

Being a monitoring tool, the survey will be used at different stages of the Project: in 2014 and in 2016 in order to measure achievements and changes[5]. In may-june 2014 the survey was administered to professors, researchers and post-docs from the Schools of Engineering, Humanities (Education, Philosophy, Sociology and Psychology) and the Physics and Mathematics departments of the School of Science. 15,4% of the permanent staff  that received the questionnaire (i.e 89 persons over 576) answered. The analysis of the survey yields to very interesting results.

Here, to give an idea, we report the data concerning the answer to Statement 20: I understand my Department’s reasons for taking action on gender equality. Actions are clear and well publicized. 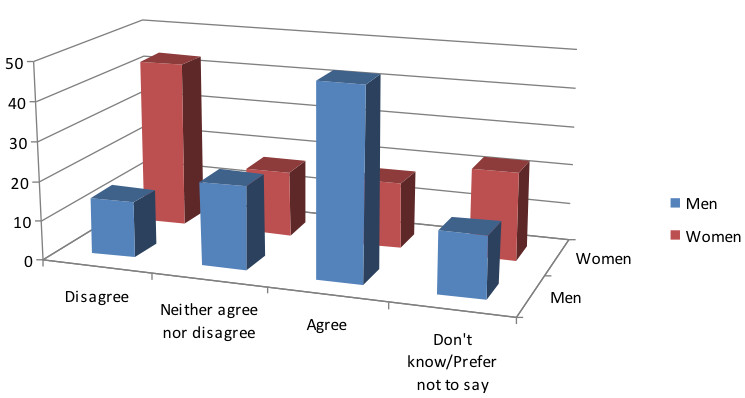 The evidence from the survey is that according to men everything is fine! They are not aware of any gender equality related problem.

This is just an example, but is confirmed by the other answers given by men showing that the general understanding they have is that there aren't gender bias in the Academia and that decisions and upgrades are mostly taken on a meritocratic basis. Men's lack of gender culture is a reality that we have to address.

At the moment our team is focused on the study and definition of a new specific set of gender indicators to be used in Research and Academic Institutions. The idea is to develop an automated toolbox of management tools able to show and measure the impact of gender equality action plans. The plan is to test the toolbox within the Consortium and then disseminate it outside.

One of the tools proposed for the toolbox is the Gender Budgeting: when addressing gender equality it is, in fact, important to understand and monitor how resources are distributed and what the effects that this distribution may produce on women and on men are[6].

[2] Among the 10 partners of the Consortium, there are 8 scientific institutions who are now implementing self-tailored action plans. An external partner is in charge of the evaluation. A technical partner coordinates the project.

[3] The UNIPD team of the GenderTime Project is composed by Silvana Badaloni (team coordinator), Marina De Rossi (Transfer Agent), Anna M. Manganelli, Lorenza Perini, Emilia Restiglian. The results presented in this paper have been developed by the whole team.

[4] The research was developed by Chiara Piccolo, University of Padua.

[5] The survey was based on an adapted version of the successful survey used in the ATHENA SWAN scheme.